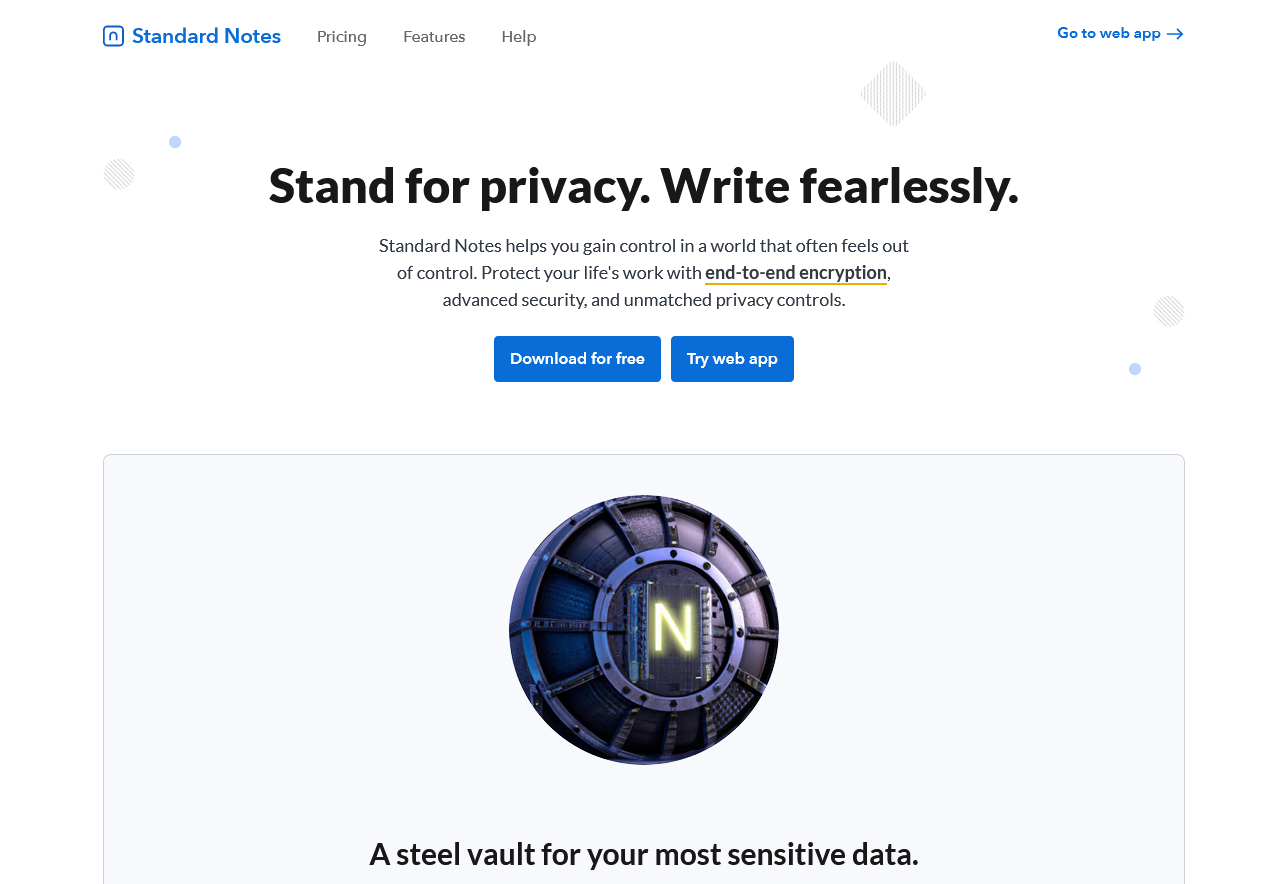 Since I use Mac, Windows, iOS and Android devices at the same time, I’ve experienced all the note taking apps on all four major platforms. Every once in a while, I switch between note taking apps and search for new products to keep things fresh.

Just recently, I switched my main phone from iOS to Android, and in the process of using Google Keep, I encountered the problem of data not syncing. In a fit of frustration, the idea of “finding a better lightweight note-taking app” entered my mind once again.

My requirements for a note-taking app are the following:

Drafts on iOS is such an app, but there is no benchmark for Android.
Support all-platform synchronization. Cross-ecological data synchronization has always been a major difficulty in application development, because of the existence of the ecological divide, a large number of existing quality applications on the Apple platform can not fully meet my needs.
Support for offline use. As cloud-based data becomes more mainstream, even Evernote, which I’ve always trusted, has recently gone cloud-based. In many environments – such as airplanes or high speed trains – where devices are not connected to the Internet, the need to write remains, and note-taking apps that do not support offline functionality are not destined to work in these environments.

While searching, I found an app called Standard Notes. After learning more about the product description, I was surprised to find that it not only met my requirements in terms of functionality, but also had a fun set of plug-in ecosystem worth exploring. So, I decided to install its clients on all platforms and started a new round of notes application tossing journey.

A simple and easy-to-use plain text management tool
“Standard Notes is designed with a white color scheme, and the interface layout is similar to other note taking tools, with three basic areas: file management, note title and text editing, and a function expansion button at the bottom.

For regular users who have not purchased the premium version, the basic services Standard Notes offers are plain text editing and management. If you register and log in to your Standard Notes account, you can also synchronize data across all platforms for free.

The text editing area is topped by a title bar, a tab bar, a toolbar, and a function bar that pops up when you click on the three dots in the upper right corner, where the core functions of Standard Notes are gathered. Among them, there are only three options in the toolbar: “Monospace Font”, “Spellcheck” and “Margin Resizers”, which are all functions that can be understood literally; “Editor” and “Actions”. and Actions require external plug-in support, which will be described in detail below; History is for version management, and you can go back to the text state at that time by clicking the corresponding time point.

Because of its simplicity and the fact that the product is mainly text-based, Standard Notes is very quick to start and switch between interfaces, especially on cell phones, which makes it ideal for quick notes. In addition, Standard Notes uses a tagging system for file management (which can be expanded to multiple levels of tags, as will be mentioned later), so that users can click the “New” button when entering text without any pressure, unlike some note taking tools where you have to choose the location of your notes before you can create a new one.

Even without any advanced paid features, Standard Notes is still a good, plain text-based note taking tool. Compared to the text-based tools that come with the system, Standard Notes has a file management system and can synchronize data in the cloud.

At present, the plug-ins provided by Standard Notes are divided into four categories: Editor, Themes, Data Care and Components, etc. These four categories are centrally displayed in Standard Notes’ plug-in library, and each plug-in also has a functional description below.

One of the key expansion points of Standard Notes is the “editor”, which is also the type with the most plugins. As mentioned above, the default initial form of the Standard Notes editor is a plain text editor, without any formatting-related features. However, if you want to write in the Markdown language, you can install the Markdown Minimist or Markdown Pro plugins to turn it into a Markdown editor.

The difference between Markdown Minimist and Markdown Pro is that the former is an upgrade from a plain text-based editor, with all Markdown syntax displayed in color to prompt the user, while the latter turns the editing area into a completely separate Markdown editor, with a separate toolbar and support for previewing effects, much like other Markdown writing applications you commonly use. I rarely preview the rendering in the editor, and I know the syntax well, so I use Markdown Minimist more often.

If you prefer a more intuitive rich text editor, no problem, Standard Notes provides Bold Editor and Editor Plus plug-ins, both of which support rich text editing with mixed text and graphics. Among them, Bold Editor is a common rich text editor, from style to functionality are almost no difference; Editor Plus is more complex, support custom fonts, font colors and insert HTML code, etc., and can also output the final page to HTML format.

However, after my actual test, the experience of using these two rich text editors is not good enough. In Bold Editor, if you want to insert an image, you need to bind to an external network drive (such as Dropbox, Google Drive or WebDev) first, and then Standard Note will upload it to the network drive and then load it as an insert link, which causes the image to be reloaded every time you open the note. In Editor Plus, there are only a few fonts to choose from, and only external links are available for inserting images (click “Upload Locally” and the system will tell you that the image encryption feature is not yet available). It can be said that Standard Notes tries to limit the size of the local client for the sake of speed and simplicity, which brings speed advantages while sacrificing part of the basic experience that the editor should have.

The editor is also available in Markdown Math for users who need to use mathematical formulas, and Code Editor for those who want to write code with it.

As a product that emphasizes data security, Standard Notes has developed several plug-ins specifically for data security, the main function of which is to allow users to save their data in their own cloud service, the core one being FileSafe, which allows you to upload attachments to a network drive and insert them into the text, as the above-mentioned Editor Plus’ insert image feature does. Other data plug-ins are mostly related to data synchronization, allowing Standard Notes data to be saved on mainstream cloud drives like OneDrive.

There are about half a dozen themes offered by Standard Notes, and after basically trying them out, I only kept the default white theme and a black and purple theme, Focus, because Standard Notes is all about simplicity and simplicity, so using other themes is more or less cumbersome. When you have loaded multiple theme plugins, there will be several colored buttons on the right side of the bottom of the main interface, click to quickly switch to the corresponding theme, this design is intuitive and convenient, suitable for users who often change themes.

The last category of plug-ins is “auxiliary tools”, currently there are only three, the number is small but each is important: Folders allows tag hierarchy, the original single-level tags to expand into multiple levels, which is very practical for note management. One of the major controversies in file management has been whether to use a folder system with nested layers or a tag system that can be nested with each other, each with its own advantages and disadvantages, and each with its own usage scenarios. The Action Bar, as its name suggests, is loaded with an Action Bar button at the bottom of the editing area, which can be clicked to display basic information such as the word count of the current note and to perform quick operations such as copying, duplicating, and email sharing; GitHub Push allows you to upload notes to a Github repository for further GitHub Push allows you to upload your notes to a Github repository for further versioning and even external sharing.

One of the most unusual plugins is Listed, a plugin that posts your current notes to Listed, a content creation platform created by the Standard Notes team to encourage sharing of tips, tricks, reading notes, etc. Listed also filters the content and distributes it through a newsletter. Given Standard Notes’ emphasis on privacy, the content distributed on Listed is also anonymous, in other words, readers who subscribe to the newsletter can only read the notes, but not see who wrote them, which is interesting. In short, the plug-in system is at the heart of the Standard Notes user experience and leaves much to the imagination of this product.

In addition, Standard Notes supports two-step verification, note locking, etc. You can feel the peace of mind and hassle of having your data protected – and even over-protected – everywhere you use this product. Just like the cumbersome image upload process mentioned earlier, Standard Notes emphasizes that every character of user data is encrypted, which also leads to problems such as no native image and attachment management, a typical manifestation of the contradiction between “ultimate privacy” and “excellent experience”.

Overall, Standard Notes is a note-taking tool for text creation, with a modular design concept that adds a lot of practical play and possibilities.

Pros
Simple, refreshing design and super fast start-up speed on mobile.
Support normal use in completely offline state and extremely fast cloud synchronization.
Modular design improves the overall ceiling of the product and increases the imagination for its future development.
All-platform support and consistent experience across platforms, advanced version of the plug-in settings can be automatically synchronized to all platforms.

Cons
Plain text-based base data limits the expansion of its functions and cannot be used for knowledge collection and management.
Currently only available in English, Chinese users may not be used to it.
A lot of external services need special internet access to access, need to build a stable environment.
The product is still in early stage, some functions are not stable or mature; the Mac version of the client is not yet adapted to the M1 chip.

Standard Notes is priced at $49.99 per year ($9.99 per month if purchased monthly), with an extra-long five-year prepaid option for as little as $2.49 per month. Standard Notes offers a 30-day unconditional money-back guarantee and a demo page with full functionality for users to try out, so it’s a good deal. It is a good idea to try out the features before confirming your card and then spend wisely.

For the time being, Standard Notes is more suitable for a “text data vault”. Its strength lies in text processing and preservation, whether it is a temporary need to back up text information or a lengthy literary creation, Standard Notes can be a good editor and storage box.

But when it comes to external material collection and knowledge management capabilities, Standard Notes is close to zero. The good thing is that the modular design of this product leaves a lot of room for upgrades, and the shortcomings of the present have a chance to become strengths in the future.

In the half month I’ve been using Standard Notes, the product has been updated three or four times, so it’s still on the rise of rapid iteration and the development team is paying enough attention to it.